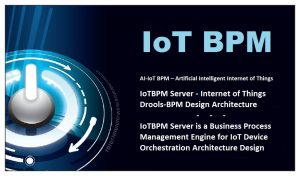 When IoT meets BPM – The IoTBPM Server documentation will help you understand exactly what IoTBPM Server is and how it is relevant to IoT Device Orchestration and IoT Device Ontology (AI-IoT Device awareness, state of being, knowledge of real-world objects, situations and abstract concepts).

In the context of IoT Devices when we say BPM, all we mean is “a sequence of tasks that allows us to achieve a goal.” In IoT BPM orchestrated each task-goal can be carried out by a different IoT Device, enterprise RESTful server, human task, or any other integrated service.

IoTBPM Server Introduction A company’s end-to-end IoT BPM workflow will almost always span more than one IoT Device or enterprise servers. These IoT Device and Services Integration into the enterprise can be mission critical to the business and is rarely modeled and monitored. Often, the message flow of events through different IoT Devices is expressed only implicitly in code.

These cross-microservice workflows can be a company’s core operation drivers, often they are rarely modeled and monitored; and the flow of events through different IoT Devices is usually expressed only in low-level Interface Flow specifications and rarely depict Business Enterprise goals.

By default, no one. In fact, the end-to-end workflow might not even be formally documented within the company, with the flow of events from IoT Device to enterprise service expressed only implicitly in code. Many IoT Devices architectures rely on a pure choreography pattern for communication, where IoT Devices collaborate by publishing events to and consuming events from a messaging platform without a central controller.

IoTBPM Server workflow solution IoTBPM Server is a workflow engine that manages your end-to-end IoT Device business processes solution. It monitors the state of activities in a workflow and determines the status of each BPM activity according to defined processes.

IoTBPM Server uses a client / server messaging model. The IoTBPM Server is a remote engine that runs in its own program space on a Java Virtual Machine. Either in the cloud or on your own servers.

IoTBPM Server was designed to operate at a very large scale and to achieve this, it provides:

We provide custom development, installation, training, and support for all software services so please feel free to contact us